One of the most significant trends in search over the last five years has been the emergence of voice search.  Whether it’s through the growth in home smart speakers or the increased adoption and use of mobile phones as user’s primary means of accessing the internet, search volume and, increasingly, voice search volume has seen explosive growth.  The question in many people’s mind has been how Google will monetize voice search given that the traditional PPC approach – multiple players bidding for position in a list of paid results – doesn’t translate well to voice.

A recent change to Google’s Local Services Ads may be another clue as to how that question will be answered.  A program Google has been testing since early 2019 called Google Guarantee is now being rolled out more broadly.  To consumers, the program is being positioned as a way for them to get insurance against poor work quality.  Going through Google to a Google Guaranteed vendor that has been screened and qualified gives the consumer the ability to be refunded up to $2,000 if they are unhappy with the quality of the work performed.  Seems like a great deal for consumers.  More interesting, however, is how the program works on the business side. 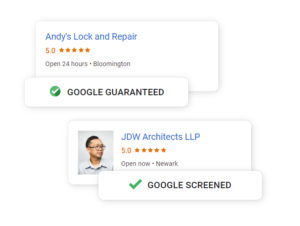 Per the terms of the program, businesses that pass the screening and qualification process required for Local Services Ads become eligible to pay $50 per month for an enhanced Google Guaranteed profile.  Companies with the upgraded profile are listed in local search results with the ‘Google Guaranteed’ designation, a big green check mark and an information call out that tells users that the work is insured.  A similar program called Google Screened exists in the professional services space.  Google has been insistent that this designation does not impact what results are given in voice search, stating that “the ranking of local providers listed on the Assistant is based on relevancy and not monetized. Any local provider can become eligible to show up in those results by going through our verification process”.

While that may be the case, it’s not hard to see how this could potentially play out.  In a list of service providers, those that have the green check and insurance against poor quality are virtually guaranteed to get more clicks and engagement.  That will, in turn, improve the relevancy for the listing and push it further up in rankings.  This makes it increasingly more likely that, with improved relevance and higher page rank, the Guaranteed listing is the result given in response to a voice query.  How this plays out when every service provider out there figures out that they need to have the designation to stand a chance in voice search is still anyone’s guess – but, for now, it appears that Google has figured out a way to indirectly monetize a space that, thus far, had not been pay-to-play.

About the Author: Brent Bouldin

Brent Bouldin is a Partner and Co-Founder of New Media Advisors. Previously, Brent was Head of Marketing, Media and Customer Acquisition at Choice Hotels International and led the Digital Marketing and Media Center of Excellence at Bank of America. Brent has held strategy consulting roles at Deloitte Consulting and Ernst & Young and served as the Chief Strategist at FedEx.com. He has led Digital and Social Committee of the Association of National Advertisers (ANA) and has a seat on the North American Board of Directors for the Mobile marketing Association (MMA). Follow him on Twitter at @BrentBouldin.

We are in-house digital marketing leaders, turned advisors. We lived client-side digital marketing for over a decade, having the privilege to work with, hire and lead the best of the best in terms of associates, agencies, vendors and channels... More »